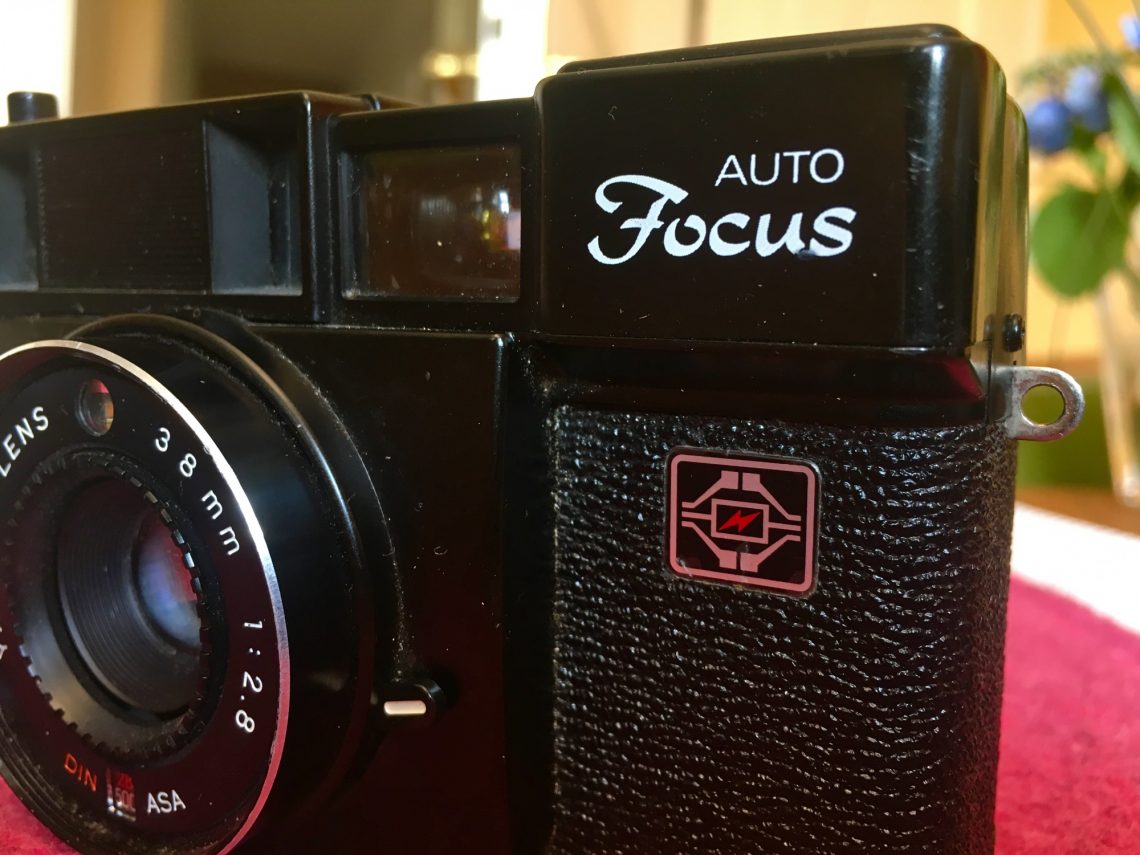 Hot shit of times past: My first and only film with a Yashica AUTO Focus Okay, i admit it. When i see at a garage sale an old camera i cannot pass on without looking at least once through its  view finder, even when the camera definitely does not belong into the Rolleiflex-Leica-Hasselblad league like the Yashica AUTO Focos i spotted last weekend amongst some old crystal glass and time-worn children’s toys. A venerable point-and-shoot veteran with the form factor of old compact cameras like the Canonet and the Minolta Hi Matic, it had the words “AUTO” and “Focus” prominently displayed at the front of the camera. A commonplace feature of today being advertised as the technological hot shit of the mid-1970ies kindled my interest in the camera, and as it was in a fairly good condition, i bought it. Five Euros are not too much for a forgotten japanese trendsetter of its day. It was a sunny saturday morning and having some free time at my disposal i decided at the spur of the moment to do a little impromtu camera test. I opened the battery compartment of the Yashica, scratched off the greenish white oxide from the corroded contacts and bought in a nearby drugstore two AA Cells and a 200 ISO color film. Before i loaded the film i did some dry training to acquaint myself with the camera i had just bought ten minutes ago.

The Yashica AUTO Focus has not really too much photographic finesse to offer: A three element lens with the widest aperture of 2.8 and a focal length of 38mm (reminding me of the 40 mm of the Summicron on my Leica CL), a plastic shutter release button, a rewind-crank, a lever that tensions the self timer and a peculiar button on the front labeled “Focus Lock”. Completely missing are any means to adjust shutter speed or aperture, there is also no exposure compensation dial, only the film speed can be set from 25 to 500 ASA in a little window below the lens.

The viewfinder is quite big and bright and shows an illuminated frame with a simple parallax compensation and a smaller illuminated frame in the middle which obviously definines the part of the image where the magic of automated focussing is achieved.

Following which principle this takes place remained a mystery for me while i was walking the streets taking pictures, but i read about it on the Internet later. The Yashica AUTO Focus used one of the first automatic focussing systems for mass market distribution called Visitronic, developed by Honeywell in the mid-1970ies. You can read all about it here. In my inexpert words it is based on the concept that two pictures are mirrored into the camera through two openings beside the viewfinder and electronically compare by an integrated circuit reading a rather simple optical matrix.

Actually i did not expect this mechanism to be as unobtrusive as a modern auto focussing system, but nevertheless the sounds it made when working astounded me quite a bit. Once you press the shutter, the camera starts a rather loud buzz that ends with the clicking of the shutter. The buzz i identified as the sound the of the lens moving to its focussing position. Obviously driven by a spring, it races from the nearest position (1 Meter) to the furthest (infinity). Somewhere in between the Visitronic decides to stop it in order to produce a – hopefully – focussed picture. After that you transport the film and re-tension the spring and the circle begins anew. Buzz-click, buzz-click, buzz-click. The sound of progress of days gone by.

Unlike the almost imperceptible hum of modern day autofocussing systems this sound is a sure-fire guarantee to turn the head of every subject you try to take a picture of. And there is another drawback with the old Visitronic: You do not get confirmation that whatever you are aiming at really is in focus. There is a red LED in the viewfinder of the Yashica, but its frantic blinking only tells you that there is not enough light to take a picture and you should move out the built-in flash – another new achievement of those days. At what distance the camera decided to focus on you can only see after the picture has been taken. It is indicated by a red pointer on a little scale showing well known distance symbols like mountains, figures and faces. This rather primitive scale and the LED in the finder are the only two ways the camera communicates with its user. Otherwise it leaves you at the mercy of total automation. The camera never tells you which of the available shutterspeeds (1/8 to 1/500 of a second) or aperture openings (2.8 to 16) it decided to use. But while the automatic exposure at least works quite reliably, the autofocus is another cup of tea.

No matter whether i just shot the picture or used the focus lock which lets the camera focus before you take the picture so you have a chance to reframe the picture, the focussing of the Yashica was rather haphazard. Of the 36 pictures i shot a dozen was sharp, a dozen was slightly out of focus and another dozen was heavily blurred. Whatever made the camera focus properly or improperly i cannot say. For instance, when i took three pictures in succession one was sharp, the next was blurred, the third was sharp again. #1 The auto focus did its job #2, seconds later, out of focus I don’t know whether i will put a second film into the AUTO Focus. It makes no sense to have it repaired, i think – in case you still can find someone who does it. And there definitely is a certain thrill to giving yourself into the hands of this forty year old fully automated contraption called a camera. Japanese Roulette, you could call it. Every successful photo is kind of a revelation as the 2.8/38mm delivers the subtle lustre of an old three-element lens, but the disappointment of getting a blurred picture of an otherwise interesting subject is a cruel experience. In court and on the high seas we are in god’s hands. Maybe when we are taking pictures with the Yashica AUTO Focus we are too.

Here are a couple of the pictures that turned out well on my one and only film with the AUTO Focus. Not a bad camera for street photography – in case it works … The instant of an instant – Travelling SX 70