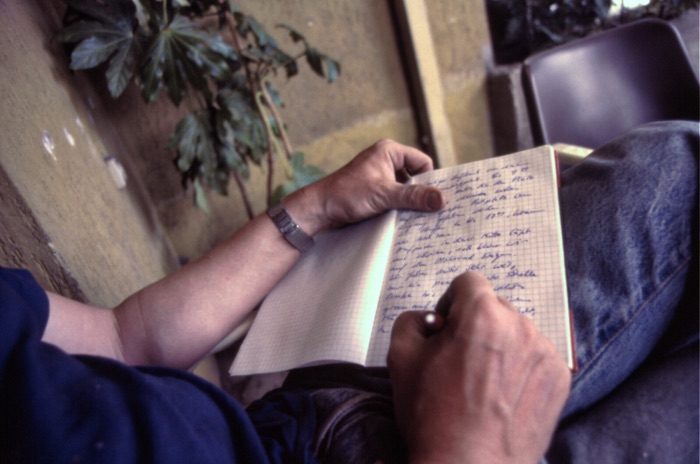 Travelog – a few thoughts on my travel photography I’ve been travelling for decades. And i’ve been taking photographs for decades. These two things go naturally together, of course. Of course? Not necessarily. Amongst my many long or short journeys there are a few i did not take a camera with me. My reasoning then was that when i earned my  living as a professional photographer all year long i needed at least some weeks a year without holding a camera in front of my face. I wrote a travellog instead and so i have rather extensive written records of motorcycle journeys all over Europe without a single photograph to accompany them.   Now i sometimes regret not having taken pictures on these journeys. Why didn’t i at least take an old folding camera with me and hit the shutter release button once a day? No use in lamenting my omissions of old, and the records of those journeys have their very own unique carrier. When i read these lines, scribbled into scuffled notebooks in front of my tent or on deck of a ferry boat,  i feel like sitting in a cinema and watching a silent movie that has no pictures, just subtitles. Or like something somebody tells you about his journeys without showing you the corresponding pictures on his smart phone.

Even on my very first motorcycle journey in 1972 – i rode a DKW 250/2 from 1953, my friend an Adler M 250 built the same year – i had no camera with me. Instead we had a record player with batteries with us and a collection of our favorite LPs we listened to while sitting near a camp fire in a dry river bed somewhere in Catalonia. The fact that i have a couple of highly cherished photos from this trip is owed to the fact that another friend joined us with a Minolta SLR we used in turn to snap a couple of black and white pictures. Of course i also undertook journeys that i have pictures of. Many pictures, actually, as my motorcycles became more reliable and my means of attaching luggage carrying systems to them more refined. When i was travelling with a sidecar, i even took a professional Nikon or Leica with me, together with a couple of lenses and a lot of film. In those days i sometimes believed it a photographic overkill to shoot on a private journey like i would on a photojournalistic assignment. Nowadays i am happy that i have eight magazines or so of color slides i then thought nobody would look at anyway.

Today i look at that from a different point of view. After i took up digital photography i shot literary thousands of pictures in the four or five weeks i was travelling. Compared with that number my old color slides seem ridiculously few. I scanned them all lately and am quite happy i took them. Could actually have been a few more … A journey with a lot of equipment – Heavily loaded MZ ETZ 250 crossing the alps, 1989

I guess that in a few decades or so the myriads of digital travel pictures will be as valuable to me as the negatives and slides of old. But this means that they have to survive this span of time. A negative or a slide are physical entities that live in boxes or sleeves and if you do not throw them away they have a good chance to survive you and to be accessible to anyone in a hundred years or so. I recently scanned an old Agfacolor film my father took in 1967 and after fifty years the pictures are still there while the first digital photographs i took at the end of the last century are quite a challenge to find and recover from the various hard disks or photo CDs. Hard discs loose their magnetism, CDs are not readable any more after ten or so years (i can tell that from my own experience). I even have JPGs that have deteriorated from having been copied from one medium to the other and show strange color streaks. A couple of weeks ago i came back from yet another journey. My first one since my return to analog photography, and with me were my lovely wife and four analog cameras: Retina III C (big C) for color negatives, complete with a 35mm and an 80mm supplementary lens, a stereo attachment and close-up lenses, a Retina IIIc (little c) as a backup (i never used it), a Rolleiflex with a Tessar lens for black and whites and a Polaroid SX 70 which i used for my project „Travelling SX 70“. My digital Panasonic GX 8 i had to take with me because of a video job on the way did not take a single photograph in the four weeks of this journey to central Italy.

But, i must admit, i had my iphone 6s with me as a photographic notebook so i could provide my analog photos with the proper place and date. When coming home i could not believe that i took over 2000 pictures with this little thing. Pictures i most probably will not look at again after cataloging my analog crop. But that is different story i maybe will tell in another post.