There are skiing resorts that in summer, when their heartbeat – winter sports activities – has been brought to a temporary stop, turn into virtual ghost towns. Many of their facilities like Hotels, skiing schools and sports shops are closed and the casualty surgeons who take care of innumerable broken bones and injured heads during the season spend the time from May to November on their favourite summer retreats on some fancy tropical island.

What is left for the non-skiing summer visitors of those temporarily abandoned places are blocked up battery farms for tourists at the foot of bled-out skiing slopes that will never recover from the onslaught of mass tourism, effigies of giant cartoon rabbits, the paint peeling off their fibre glass bodys, uniform windows in concrete appartement buildings where the blinds stay shut for many months and empty parking lots, their asphalt cut by myriads of the scratches from the steel edges of skies .

The town of Obertauern, probably the most extreme of all the artificial skiing villages in the Lungau near Salzburg,  also has vor life-sized bronze figures of the Beatles standing in front of a closed down Hotel in Main Street, commemorating the fact that the fab for stayed her a couple of days in 1965 to shoot the winter scenes of their movie „Help“ – for the actual skiing shots they had to be doubled by ski teachers from the village who became local celebrities.

Skiing rabbits and John, Paul, Ringo and George forever standing guard in front a tourist hotel – motives galore for a Kodak Retina Reflex Model 025, that was together with an Agfa Isolette III one of my two photographic companions on a recent trip to the bleak realms of the tourism-haunted Austrian mountains. 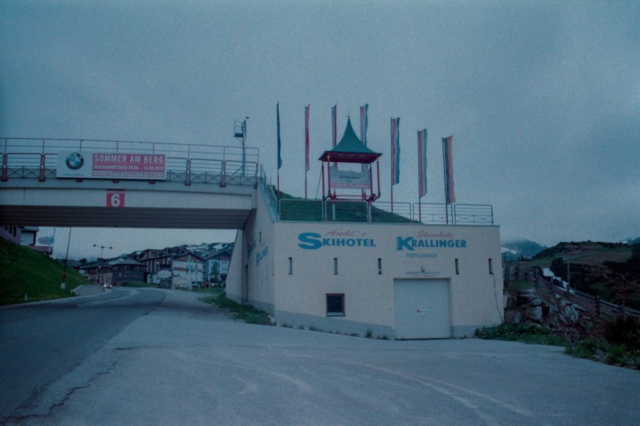 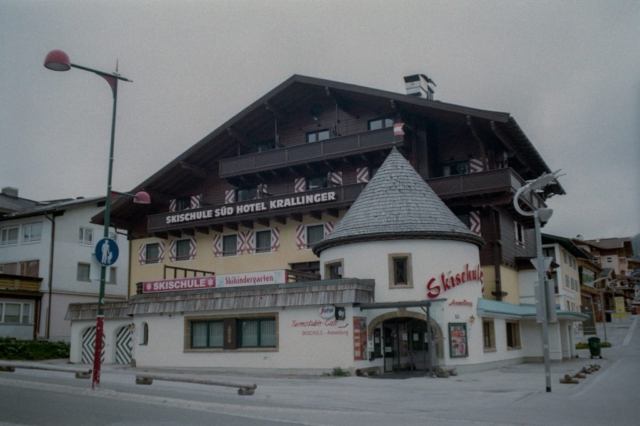 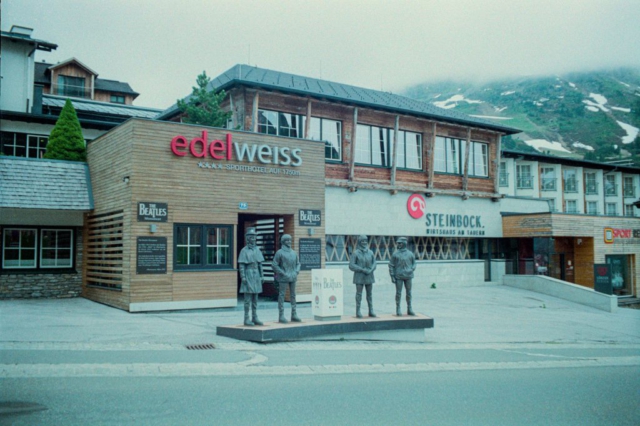 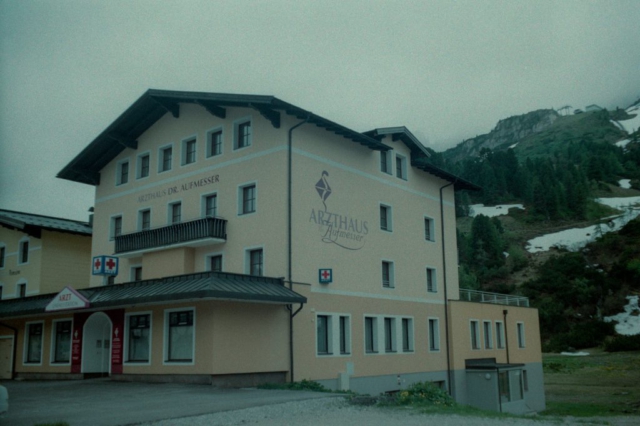 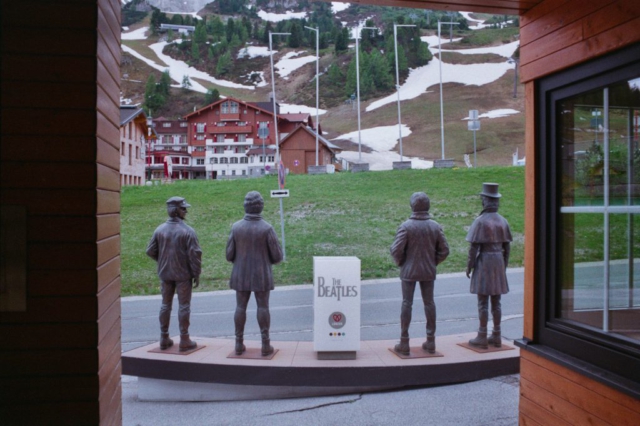 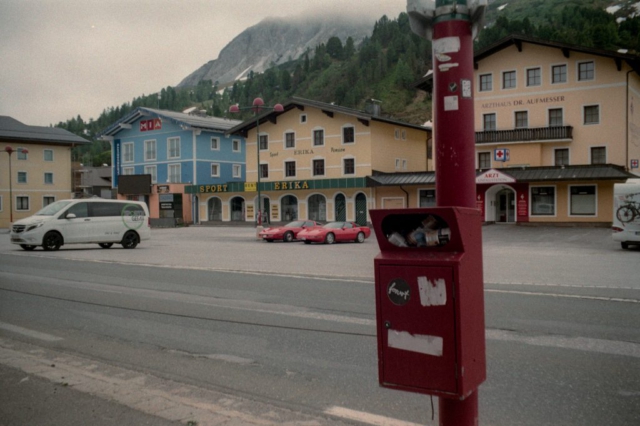 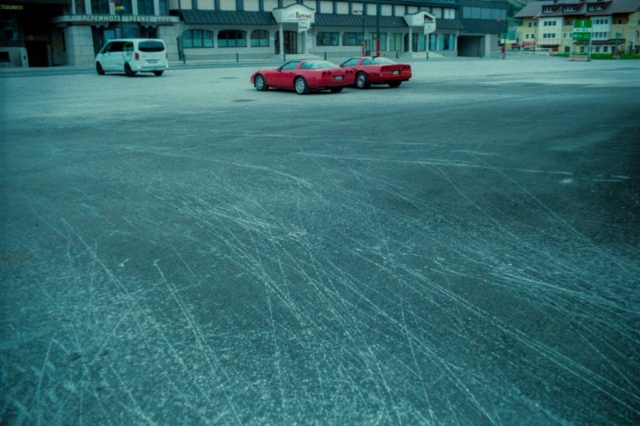 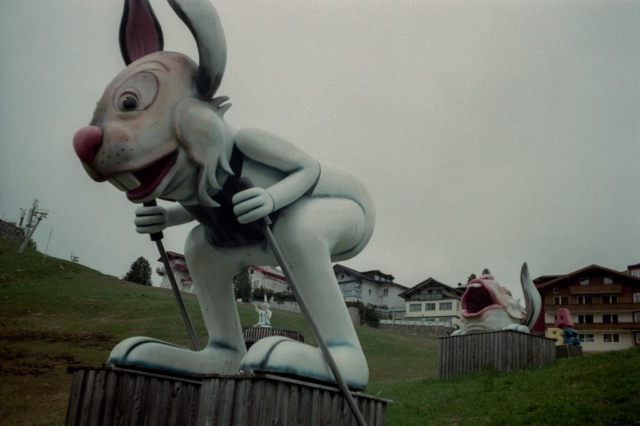 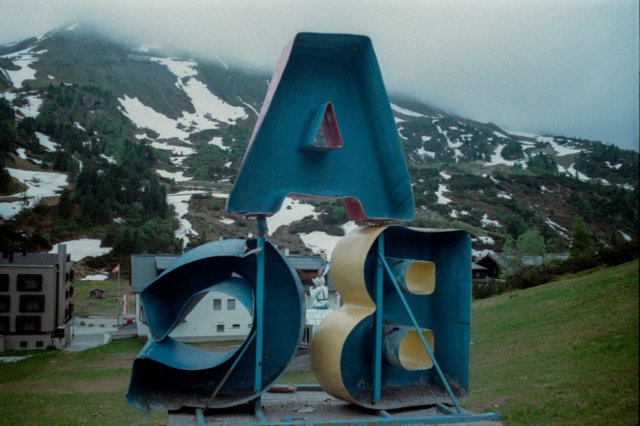 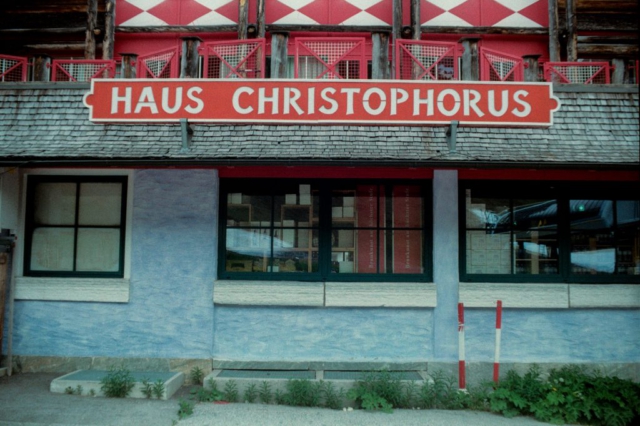 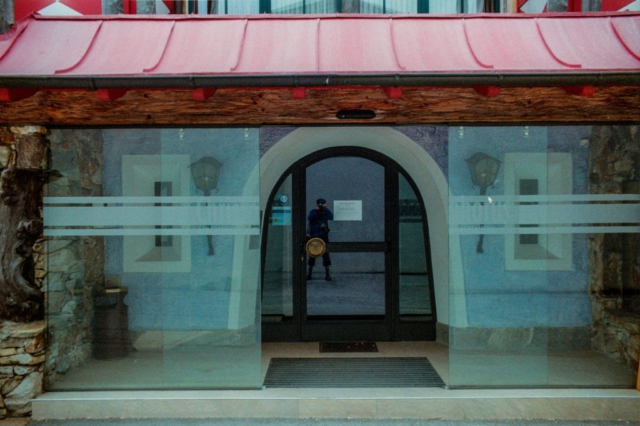 To shoot the touristic gaffes of our modern times with an archaic camera like that has a very special allure to me. When the Retina Reflex was built in 1957, in the camera works of August Nagel in Stuttgart, Obertauern, the place where i took all those pictures, did not even have a name. It was just a spot where a couple of hotels had been built in the early 1950ies and the few guests that came had to even the slopes by pounding them with their wooden skis as neither piste bashers and snow cannons had been invented yet.

It is quite likely that some of them had a Retina Reflex like the one i carry with me more than half a century later, a mechanical beauty that sports a Synchro-Compur leaf shutter, an uncoupled selenium exposure meter with EV-System and the legendary, quite fast Retina Xenon 2/50mm, a lens i know and cherish from my Retina IIIC, the rangefinder predecessor of the Retina Reflex. Like the „Big C“ the Xenon of the Reflex can be fit with different auxiliary lenses that can replace the front element of the 50 mm and transform it either into a 5.6/35mm Curtar-Xenon or a 4/80mm Longar-Xenon. Those lenses are – compared with the tiny 50 mm front group rather hefty chunks of glass and their optical quality is inferior to that of the excellent Xenon, as can be seen by my pictures i took with the 5.6/35mm Curtagon in this gallery.