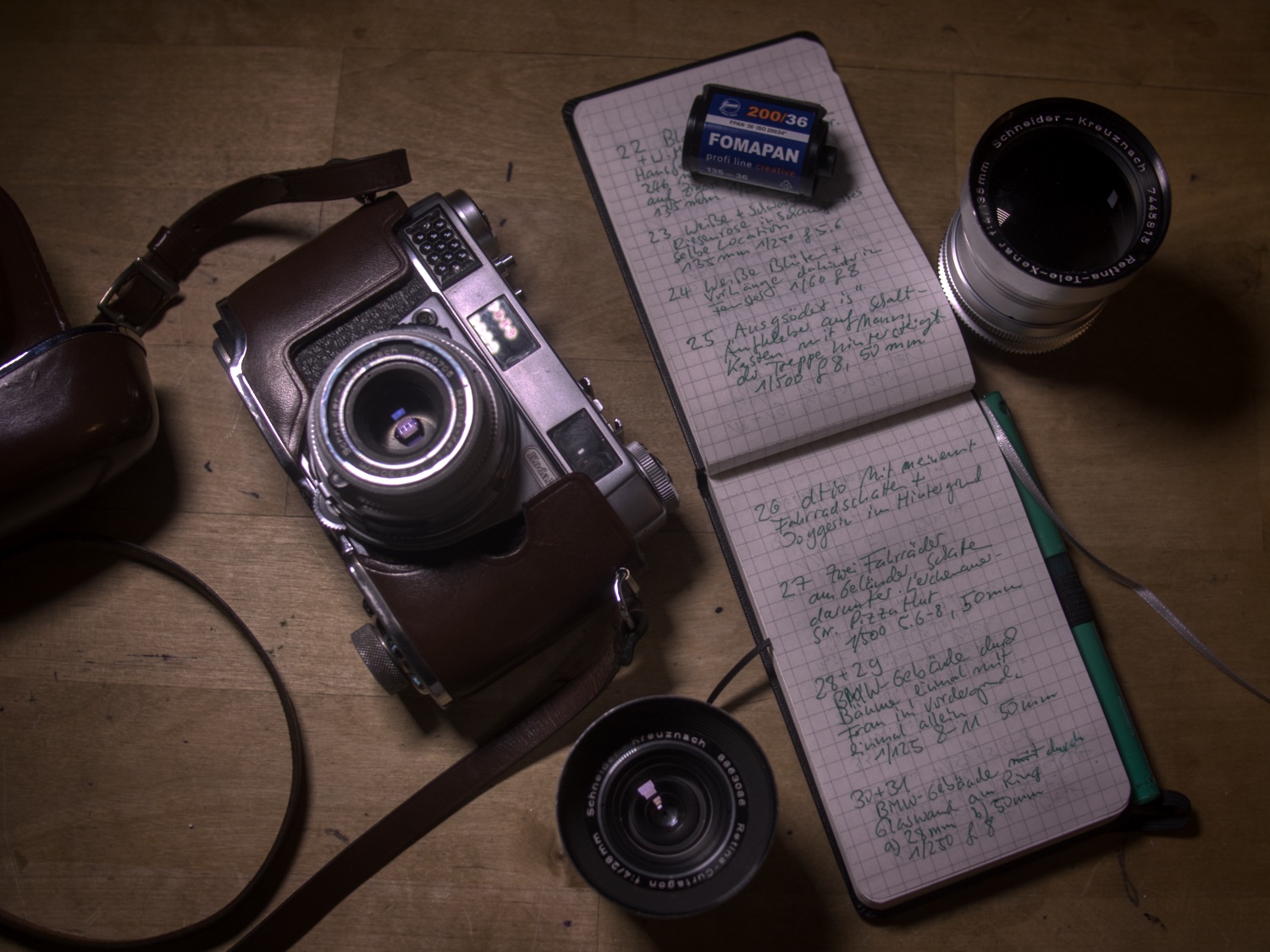 On this last weekend in February 2019 a surprisingly bright sun spreads this special late winter light over the town, promising warmth and spring while a cold eastern Wind keeps the temperatures just a few degrees over zero. In spite of the cold i take a walk around in my neighbourhood where winterly clad couples push baby buggies past the dark shopping windows of a sunday afternoon. The sun falling into the streets like a gigantic spotlight brings out the structures in the walls and patterns them with the branchy shadows of leafless trees.

I have my Kodak Retina IIIS with me, one of the last rangefinder Kodaks built in Stuttgart, Germany. Although it lacks the compact elegance of the folding Retinas like my IIIC, it offers genuine interchangeable lenses that use the so called DKL-bajonet that was developed by the Deckel company in Munich, the maker of german leaf shutters like Synchro-Compur. Those lenses, of which i bought a 4/28mm Retina-Curtagon and a 1:4/135 Tele-Xenar together with the camera also fit the Kodak Retina Reflex S, a fact that opens the Kodak enthusiast that own both cameras a wide field of usage when it comes to long lenses and close-up photography. Both lenses come from Schneider Kreuznach who also built the 2.8/50mm Retina-Xenar standard lens that came with the camera. I used all three lenses on my little late february walk.

According to the rules of Latergram the Fomapan 200 black and white film i shot now goes into an empty slide box together with the notes i took after i exposed every single picture. They contain the date, the lens and the exposure and aperture values together with a short description of what i took the picture of. In this little box the undeveloped negatives will sleep as latent pictures for at least a year before i take them out again, read the notes and try to imagine what i photographed while i develop the film. Here are some of the notes i took and put together with the undeveloped film into my little time capsule. Until the negatives are developed they are the only representation of the pictures i took, together with my memories, of course.

Picture 1: A bicycle basket with plastic flowers in the passage to our back yard. Xenar 50mm, 1/30s, f 4

Picture 7: A house in Schleißheimerstraße, Shadows of tree branches on little statues of Mary, Joseph and little Jesus over the entrance door. Above them in a window the naked butt of a greek statue. Xenar 50mm, 1/125s, f 16

Picture 9: switch boxin  Schleißheimerstraße – a flash in black, withered paint and something that looks like a mushy face with bared teeth. Xenar 50mm, 1/60s, f 11.

Picture 10: In-door bakery in Schleißheimerstr. –  a doughnut logo etched into the window pane and bags with pictures of bread and buns printed on them. Xenar 50mm, 1/60s, f 11